Trying to decide who to research and write on next.  Here’s who I’ve narrowed it down to:

Jean Cusson:  This would be another of the old original settlers into New France.  Jean was a farmer, seigneurial attorney, clerk of court, royal notary, and acting king’s attorney.  He would be my 9 x’s great grandfather.

Pierre Robert:  Born in Boucherville, Quebec in 1671.  He became a voyaguer on the great lakes with his brothers.  He was one of the original settlers of Detroit and moved his family there. He would be my 8 x’s great grandfather.

Joseph Huck:  Not sure if I have enough information on Joseph yet but I’m researching.  This would be the first in my paternal German line.  Joseph was born in Alsace Lorraine in 1810 and arrived in Waterloo Canada around 1831-3. The area was called Little Germany.  He would be my 3 x’s great grandfather.

Nicolas had been submitted for approval.  Just waiting for it to publish, should be available withing the next few hours…. 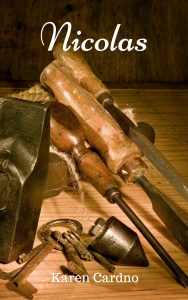 I’ve added a new page to the blog called “Preview”.  You can find the first chapter of all four books available there to read.

For those of you doing genealogical research, be careful, it can be addicting. My tree is on ancestry.com.  It is always on public so it can be viewed by anyone.  You do not have to pay for an account to make an account.  You can register and use their free databases.  I’ve included the link to the free databases below.  FYI Ancestry.com never seems to run right in google chrome, I usually have to switch over to Internet Explorer when I use it.  Could be my computer settings but if you have problems try switching search engines.  My tree is under ‘Karen Huck Cardno’.

Nicolas is almost done, took a day off from writing and worked on the cover and ‘blurb’.  What do you think?

Nicolas Pelletier signed a contract to become a master carpenter in 1612, he was just fifteen at the time.  For the next four years he learned his craft, always thinking about the new settlement he had heard about far across the ocean, in a place called New France.  For twenty years he would work hard and save before he was finally able to make the journey, along with his wife and two young sons.  He arrived at Fort Quebec at a time when less than one hundred people lived there, having a skilled trade made him an asset to the struggling community.  For the next forty years he and his wife Jeanne would live in and help build some of the oldest cities in what is now called Canada.  Living first in Quebec, then Sillery and finally moving on to Sorel as each settlement was founded and evolved.  They would face difficulties along the way, such as court disputes with the neighboring Indians at the mission their land bordered, and skirmishes with the Iroquois Nation. They were two of the lucky few, who were able to be part of New France, as it grew and began to prosper.